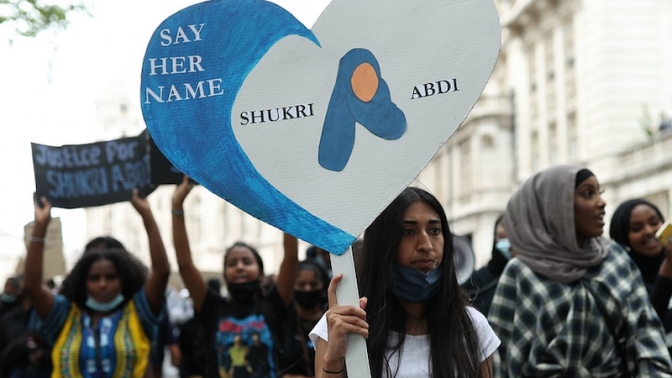 Thousands of people gathered across England to mark the first anniversary of the death of a 12-year-old refugee girl who drowned in a river.

An ongoing inquest was told in February an unnamed child had confessed to threatening her to "get in the water".

The case has been highlighted by supporters of the Black Lives Movement, including Star Wars actor John Boyega.

Shukri Yahye-Abdi came to the UK in 2017

More than a million people have signed a petition calling for "justice for Shukri".
Thousands of people attended events marking the anniversary of her death, including in Manchester, London, Cardiff and Bristol.

Report
Demonstrations in support of the Black Lives Matter movement were also held in Portsmouth, Oxford, Coventry and Stoke-on-Trent.

Fadumo Osman, one of the organisers of the Manchester event, said: "I myself am a black Muslim female, I can see myself with Shukri. It could have been myself, my sister."

She said organisers wanted to "put pressure on the institutions involved… to be transparent".

Ms Osman, who came to the UK as a Somali child refugee, said: "A lot of underprivileged children face difficulty within schools when they first arrive in the country and I hope that something is done institutionally to prevent this happening again."

Hundreds of people marched through London on Saturday
Shukri grew up with her Somali family in a refugee camp in Kenya until 2017, before moving to the UK.

The inquest heard from witnesses who saw Shukri with other children, who cannot be named for legal reasons due to their ages, before her death.

The hearing was told that Child One confessed to her foster carer that she had said "if you don't get in the water I'm going to kill you" but added the comment had been made in a "joking manner".

The hearing was adjourned before lockdown restrictions, with the next date yet to be confirmed.

More than a million people have signed a petition over the case
After Shukri's death, her school said it would review its anti-bullying policy amid speculation over the circumstances.

In June 2019, Greater Manchester Police (GMP) said it was treating the circumstances as a "tragic incident", adding that it did not believe there were any suspicious circumstances.

However, the Independent Office of Police Conduct announced an investigation in August into GMP's handling of the case, which was completed in January.

Its conclusions have been shared with Shukri's family and GMP, and will be published following the inquest.

Greater Manchester mayor Andy Burnham said earlier this month he would "look into the case" after he received about 6,000 emails about it.