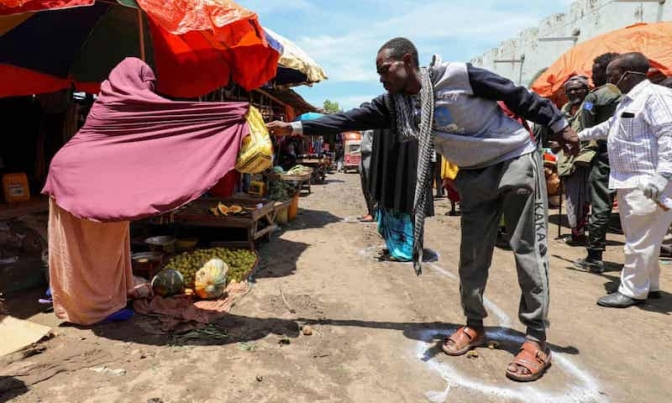 Government rejects claim by militant groups that the virus does not harm Muslims and imposes night-time curfew.

Somalia has recorded a rise in coronavirus cases in the past week, with the majority of those affected reportedly young people.

So far there have been 237 confirmed cases and eight deaths in the country. A member of parliament and a state minister are among those who have died.

“The sharp increase is due to the fact that we are testing patients with all symptoms, not necessarily contact tracing,” said Dr Mohamed M Ali Fuje, the government’s newly appointed chief medical officer.

Coronavirus in Africa: what happens next?

Ninety per cent of the confirmed cases are in the capital, Mogadishu, and although the government has introduced measures to contain the virus, widespread behavioural change is proving difficult. People continue to congregate in mosques, and gather in groups at teashops and restaurants, increasing the risk of infections.

“Life is normal here,” said Khadija Hassan, a resident in Mogadishu. “It is like the global pandemic has not reached us yet. Personally, I won’t leave my house for two weeks because I see people in my neighbourhood showing symptoms of the coronavirus. They talk of loss of smell, fever and cough and they say it is just a common cold as they continue to mingle with no isolation or social distancing.”

Last week the government imposed a night-time curfew and schools have been closed, but the streets have remained full.

“It is as though the schools were closed for public holiday,” Hassan said. “Students and children are freely loitering in the streets, playing football and gathering in crowds in the neighbourhood.”

It is as though the schools were closed for public holiday
Khadija Hassan, Mogadishu resident

There is also fear that the virus may have crept into the city’s crowded settlements of around 800,000 displaced people, many of them victims of the climate crisis. In the cramped, squalid conditions of the camps, there is only so much the government can do to prevent the spread of the virus.

What is more concerning to authorities are the dangerous rumours about coronavirus that have taken hold. These myths include the theory that the virus does not affect Muslims or is a punishment for non-believers for oppressing Muslims. The militant group al-Shabaab, who control large swathes of south and central Somalia, has shared similar messages.

Earlier this month, a controversial cleric claimed he would cure coronavirus patients using the Qu’ran and has called on people to seek his help. “If I fail to cure it, I should be shot in the head,” he said in a video posted on Facebook.

In another video, he claimed to have cured a patient from London over the phone, and he has promised to treat the Somali diaspora if they contact him, claiming to have already cured patients with HIV in the past.

Muslim clerics, including one of the most respected Somali clerics, Sheikh Maxamed Umal, have joined the national task force on the crisis, and have been quick to try to debunk the myths, encouraging people to protect themselves and seek medical advice if they feel sick.

But the national task force has yet to announce firm guidelines on how to approach the holy month of Ramadan, which starts on Thursday and involves communal rituals such as breaking fast together and extended night prayers.

“The ministry of religious affairs continues to engage closely with religious leaders, there is a responsibility on all leaders to assist in raising public awareness and community engagement throughout the country with regard to Covid-19. It has not been exhaustive and we should continue to push the envelope,” said Fuje.

Somalia’s health system has collapsed after 30-years of conflict and authorities are working hard to avoid the devastating impact of the coronavirus.

There are 14 isolation centres serving a population of 15 million people yet a hospital with modern medical equipment, including ventilators, is lying unused in the capital for political reasons, according to Mahad Awad, an MP who criticised the United Arab Emirates government, which built the facility before closing it two years ago over a diplomatic dispute with Somalia.

“We are extremely concerned of this pandemic,” Fuje said. “Our testing capacity is limited, we don’t have enough facilities or test kits to do mass tests. There are currently only three approved Covid-19 testing facilities countrywide.”

Impact of COVID-19 On Somaliaâ€™s Economy: Will the virus be a springboard to severe crisis?