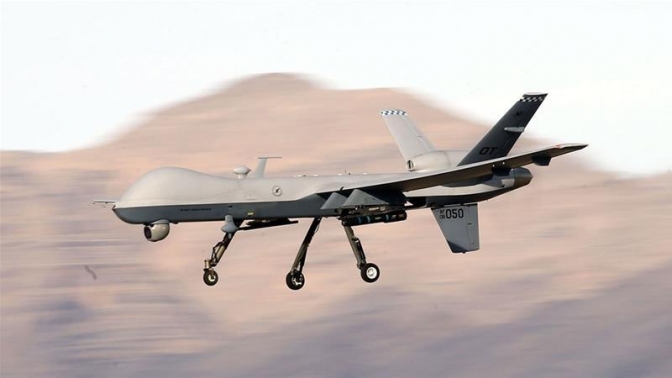 A US air strike in southern Somalia killed civilians, not al-Shabab fighters as claimed by Washington, family members and a politician told Al Jazeera.Washington carried out the air strike near the farming town of Janaale, 95km south of Mogadishu, on Monday claiming the attack killed "five terrorists".

More:
* US air strike kills telecom worker in Somalia
* Is the US military doing a 'fantastic job' in Africa?
* How drones have come to dominate the battlefield
The victims were civilians travelling in a minibus heading to the capital Mogadishu, Abdullahi Abdirahman Ali, who lost his father in the air strike, said.
"The Americans are lying. They killed my elderly father. He is 70 years old and can barely move. He can't walk without the help of a walking stick. He is not al-Shabab," Abdullahi told Al Jazeera.
"They killed these civilians because they know no one will take action against them," he added, anger palpable in his voice.
One of the other victims was a 13-year-old boy, relatives said. Photos posted online show some of the bodies burned beyond recognition and the wreckage of a blood-soaked vehicle.
"The minibus was going to Mogadishu. If the Americans suspected anything, they could have waited for them there. For them it is easier to kill civilians than to question them," Abdullahi added.
The Somali government controls Mogadishu after pushing the al-Qaeda-linked group out of the capital in 2011. The US military has a base in the seaside city.
Mahad Dhoore, a Member of Parliament, also confirmed the victims of the air strike were civilians.
"They killed civilians. They are not telling the truth when they say they killed terrorists. These people are my constituents," Mahad told Al Jazeera.
"Civilians are paying a heavy price. On one hand they are been punished by al-Shabab. On the other American drone strikes are killing them."
Washington has carried out at least 25 air strikes in Somalia this year, according to figures released by the US military.
Last year, the United States conducted more than 60 air raids in the Horn of Africa country.
"Our air strikes are a key effort to combating terror and helping to bring stability and security to Somalia," Chris Karns, US Africa Command director of public affairs, said in a statement following the latest attack.
"Not only do they degrade al-Shabab's ability to conduct violent activities in the region, but they place relentless pressure on their fighter network and impede their ability to export terrorism," he added.
Mahad said US air strikes could be empowering the same group they are intended to weaken.
"Al-Shabab will use these attacks for recruitment and for propaganda. America is playing into the hands of al-Qaeda by killing civilians and then denying," Mahad said.
Follow Hamza Mohamed on Twitter: @Hamza_Africa