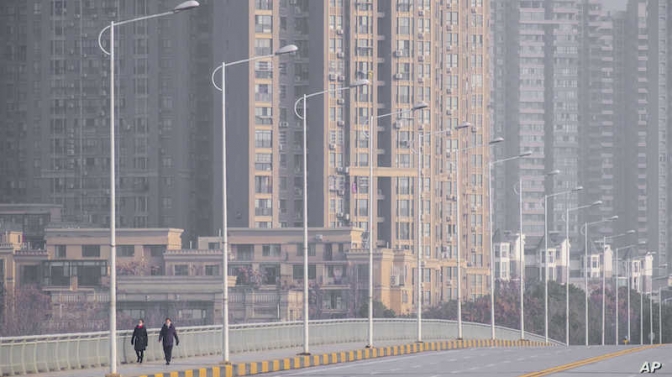 Somali students in coronavirus-stricken Wuhan say they are trapped in their university rooms feeling frightened and lonely, and are appealing for the Somali government to help them leave the besieged Chinese city.

"The situation in Wuhan is very, very dangerous," said Yassin Abdi Said, one of several Somali students who spoke to VOA's Somali service via Skype. "The city is on lockdown, most shops are closed. Authorities are not allowing anyone to go out or come in." Wuhan is the epicenter of the epidemic.

Said added that no taxis are operating, and the hospitals are filling up as the potentially deadly virus spreads.

Like Said, accounting student Redwan Mohamed Nur, 22, has remained holed up in his university dormitory room for the past five days. One of 14 Somali students at Wuhan University, he says he has left his room only to walk to the university's front gate, where school officials have been delivering food to foreign students every second day.

"I did not leave my room, I can only go as far as the gate to receive the food," Nur said. "I'm scared to even open the window because I'm afraid the wind may carry the virus in. I use a mask but it's difficult to get it now."

FILE - A medical staff member tends to a patient with pneumonia caused by the new coronavirus at the Zhongnan Hospital of Wuhan University, in Wuhan, Hubei province, China, Jan. 22, 2020.

The university had been expected to reopen in February after shutting down for the Chinese New Year holiday, but authorities have told the students they should now expect it to remain closed for another month.

"We want the Foreign Ministry of Somali government to evacuate us, we need emergency support," Nur said.

Altogether, about 34 Somalis, most of them students, are trapped at universities in Wuhan, keeping in touch with one another through a small community organization. So far, none has been infected by the still mysterious disease which has killed more than 100 people.

Another member of that community is 23-year-old Abdulkadir Mohamed Abdi, one of four Somali students at China University of Geosciences. Abdi, who is studying petroleum engineering, says he too has remained inside for five days trying to avoid becoming infected.

"You can get infected without showing the symptoms," he said. "Therefore you are safe to be indoors."

Abdi says he has run out of food and plans to venture outside in search of an open supermarket within the next couple of days.

"Traffic has been stopped," Abdi said, "and unless they are transporting patients or have a reason to move around, people have been told to stay indoors."

He also appealed to the Somali government for help to get out of Wuhan, even if only to be evacuated to another location in China.