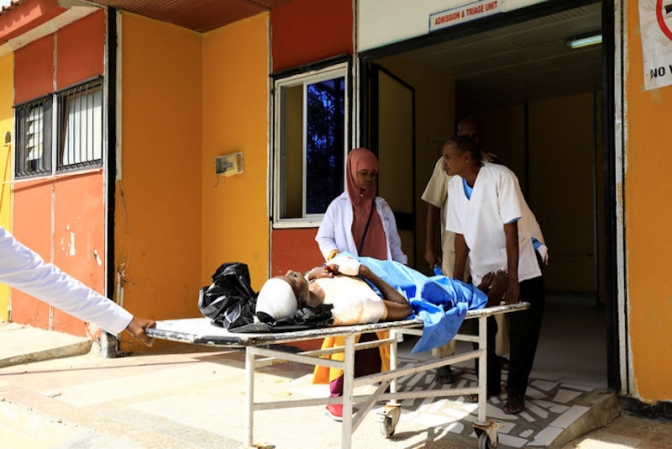 JEDDAH: At least four people were killed and up to 20 injured in a suicide car-bomb attack on Saturday by Al-Shabab militants in Somalia.

The bomb struck near the town of Afgoye, about 30 km west of the capital. “The blast was huge, it destroyed a container used by the Turkish engineers who work on the Afgoye road construction,” one witness said.

Turkey is a major source of aid to Somalia, and Turkish engineers are helping with road construction.

“There were police who were guarding the Turkish engineers and several other people gathering near the checkpoint,” another said. “I saw several dead bodies, and Turkish workers who were wounded.”

Local residents described a huge explosion followed by clouds of smoke. “Before the blast, several Turkish engineers and a well-armed convoy of Somali police were at the scene,” shopkeeper Farah Abdullahi said. “We see casualties being carried but we cannot make out if they are dead or injured.”

Al-Shabab has carried out a series of attacks in recent weeks including a massive car bombing at a checkpoint in Mogadishu in late December that killed at least 90 people.

Turkey is a major source of aid to Somalia, and Turkish engineers are helping with road construction. “We curse and condemn in the strongest terms the bomb terror attack that targeted innocent civilians in Somalia,” the Turkish Defense Ministry said.