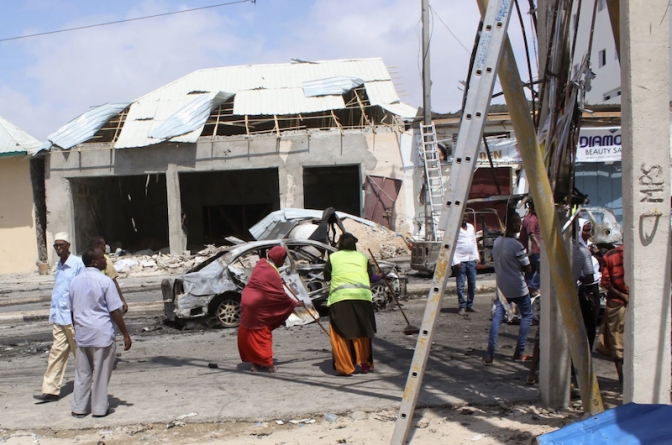 NAIROBI — Just as soon as the U.S. military closed out a year in which it struck al-Shabab militants more times than ever — at a pace of just over one airstrike per week — the Somali militant group carried out its most brazen and successful attack on U.S. forces in its history, killing one soldier and two private contractors and destroying six aircraft at an airstrip in Kenya.

It was symbolic of the greater U.S. effort against al-Shabab: Since the Trump administration loosened the rules of engagement in Somalia in March 2017, leading to a more aggressive use of airstrikes, the group has staged nearly 900 attacks on civilians alone, not counting hundreds more against U.S., Somali, Kenyan and other armed forces.

“The rate of al-Shabab’s attacks, at least against civilians, is higher now than before,” said Hussein Sheikh-Ali, a former national security adviser to the Somali president who took part in discussions with Pentagon officials as they weighed changing their rules of engagement in 2017.

Nearly 2,000 Somali civilians have probably been killed by al-Shabab since that change, according to data from the Armed Conflict Location & Event Data Project, or ACLED, a nonprofit research group that aggregates reports of violence. Al-Shabab continues to control almost all of rural southern and central Somalia, while staging regular attacks on the capital, Mogadishu, where residents know any trip into the city center could be their last.

Al-Shabab is not at its strongest point. In 2011, before a 20,000-strong African Union force intervened, and before the United States ramped up its airstrikes, al-Shabab controlled every city in southern Somalia and appeared on the verge of taking Mogadishu. The group’s goal is still the same, however: to chase away, or at least outlast, foreign troops in Somalia, clearing the way for a broader takeover in which it could impose a strict version of Islamic law.

In the past few years, the group has repeatedly demonstrated its ability to make powerful explosives and destabilize Somalia’s fledgling government. Since its inception in 2006, the group has carried out more than 10,000 attacks in Somalia and nearly 300 in Kenya. More than 20 people have been killed by al-Shabab in Kenya in just the past six weeks.

“Al-Shabab has had to adapt. But adapt it did,” said Ken ­Menkhaus, a Somalia scholar who has given expert testimony to successive U.S. Congresses. “It has fully penetrated local governments and institutions, has a robust network of informants and operatives, extorts ‘taxes’ from all Somali citizens and instills fear of assassination in anyone who considers opposing them.”

According to ACLED data, al-Shabab’s tactics have shifted slightly but significantly since March 2017, when the rules of engagement were loosened. In the years before, around 70 percent of al-Shabab attacks could be classified as “battles” with government-aligned armed forces. In the years since, that number has dropped to about half, with a marked uptick in the use of bombs, which more typically target civilians.

To some observers, the shift indicates a resilience that more and more airstrikes won’t be able to counter. Instead, they say, it has opened up the U.S. military to scorn from the Somali public, which is feeling the brunt of al-Shabab’s attacks.

“By making it a ‘kill as much as you can’ strategy, it has become hard to avoid collateral damage and civilian casualties whether by the airstrikes themselves or because they provoke al-Shabab,” Sheikh-Ali said. “I believe that this strategy will not in any way affect al-Shabab’s short- or long-term capabilities. The U.S. is just playing whack-a-mole. Somali people don’t take this strategy seriously anymore.”

About 300 U.S. soldiers and military contractors are stationed in Kenya, bolstering the missions in Somalia. The al-Shabab attack Jan. 5 on an airstrip used by those U.S. forces was a major setback due to both the American casualties and the loss of high-value equipment.

Col. Christopher Karns, a U.S. Africa Command spokesman, also acknowledged in an email to The Washington Post that some of the attackers escaped.

The White House has not commented publicly on the deaths of the three Americans in that attack, nor has the president done so independently. The U.S. military has been unusually outspoken in its public response, which included sending its top brass in East Africa to the base adjoining the airstrip that was attacked.

“Al-Shabaab is ruthless and must be dealt with before the network expands its reach to other places, to include their stated desire to strike U.S. citizens on the U.S. homeland,” Gen. Stephen J. Townsend, the commander of U.S. forces in Africa, said in a statement last week. “This al-Qaida-aligned terrorist network has demonstrated an ability to conduct external attacks previously and will continue to do so unless they are countered where they reside.”

During the Obama administration, airstrikes were reserved for high-value targets and they killed al-Shabab’s leader and co-founder, Ahmed Abdi Godane, as well as its top explosives expert. Other airstrikes targeted meetings where more than 100 suspected al-Shabab fighters might have been present.

“Airstrikes are only one means and not the ultimate solution,” Karns said. “They do create organizational confusion in the ranks of al-Shabab and offer additional effects. Diplomacy, development and defense all need to come together to truly counter the ­influence and dismantle al-Shabab.”

The African Union’s force in Somalia had intended to draw down over the course of this year, but many experts expect that mission to be extended given how strong al-Shabab continues to be. Somalia is planning national elections for this year, which are expected to be targeted relentlessly by al-Shabab.

Sheikh-Ali and Menkhaus said that although the Pentagon’s ­airstrike-heavy strategy doesn’t seem to be tipping the scale, foreign intervention can only achieve so much in Somalia, and the only way the country will overcome the threat from al-Shabab is with a government stronger than the weak and notoriously corrupt one it has now.

“At this point, it is worth asking if the U.S. counterterrorism mission in Somalia is in need of a fundamental review,” Menkhaus said. “The current policy is based on a set of assumptions about al-Shabab and the Somali government that do not appear tenable.”