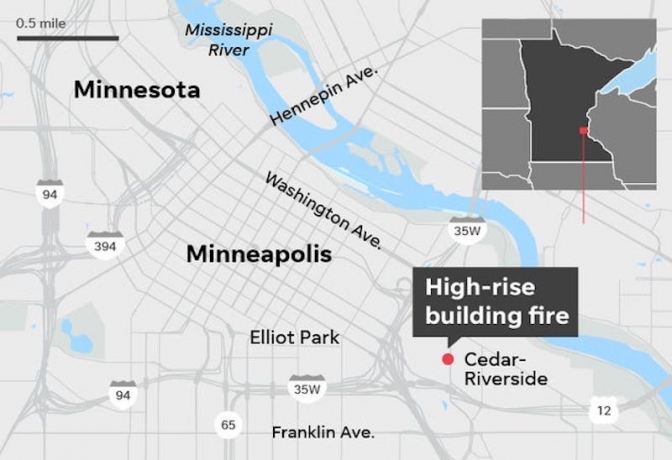 There was no immediate indication what caused the blaze in the Cedar-Riverside neighborhood, located in a part of Minneapolis called Little Mogadishu for the many Somali immigrants who have settled there.

The fire broke out around 4 a.m. on the 14th floor of the Cedar High Apartments. Fire Chief John Fruetel said firefighters found heavy smoke on the 16th and 17th floors as residents were evacuated through the building's stairwells.

Fruetel said at a briefing that the fire had a "pretty good head start" by the time firefighters arrived and found heavy fire and high heat. The victims were found in various units on the 14th floor.

"A very tragic night at the beginning of a holiday weekend," Fruetel said. Mayor Jacob Frey, in a Facebook post in English and Somali, called the fire "devastating."

The genders and ages of the victims and the conditions of the injured were not immediately known, the chief said. A firefighter was being examined for a minor injury, he said.

The building is part of a complex informally known as The Cedars. Minneapolis Public Housing Authority spokesman Jeff Horwich said Cedar High has 191 apartments, all one-bedroom or studio units and intended mainly for seniors and singles.

Horwich said it's unusual for fire to spread in the authority's buildings, including Cedar High.

"The buildings are made of concrete, natural fireproofing between units that typically keeps a fire from spreading," he said. "Clearly, it did spread to multiple units."

Though the building sits in a heavily Somali section of Minneapolis, it's a melting pot of newer arrivals in the city, City Council member Abdi Warsame said. When residents gathered after the fire for a meeting, organizers needed to arrange Somali, Korean, Spanish and Aramaic interpreters.

Warsame, who is Somali-American, said he knew that one victim was a Somali grandmother. Many of the residents' children and grandchildren flocked to the building to check on their family members, he said.

Warsame toured the floor where the fire broke out, describing it as "absolutely gutted" and "horrendous."

"It could have been a lot worse," he said of the blaze.

Fire spokesman Bryan Tyner said four of the victims were located on the 14th floor and another in a stairwell, and it was unknown if any of them were related or came from the same unit.

Floors above the 14th were being checked for habitability. Horwich said the 14th floor would be uninhabitable for some time, but it was possible residents of the 15th floor and above could return as early as later Wednesday.

Horwich said the Red Cross was on the scene to offer help and counseling to residents.