Show of resilience as attacked hotel reopens in Nairobi Featured 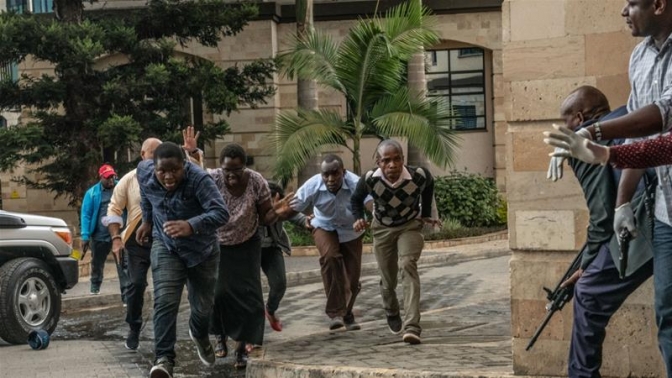 January 15 attack on Kenyan hotel complex by al-Shabab-linked gunmen killed 21 people and wounded many others.

Nairobi, Kenya - Normalcy has returned to the 14 Riverside Drive complex, the scene of a bloody attack at the beginning of the year as high-end hotel DusitD2 reopened its doors to customers after nearly seven months.

The attack at the office and hotel complex, orchestrated by at least five al-Shabab-linked assailants, killed 21 people and wounded many others on January 15, echoing a 2013 assault on an up-market shopping centre in the capital.

In a show of resilience, the DusitD2 complex reopened on Wednesday with staff at most of the local and foreign firms housed there shrugging off concerns to go back to work amid tightened security.

But some are not going back.

Roselyne Chilande, 35, a supervisor at a parking ticket firm serving the 14 Riverside Drive complex, who was shot in the leg during the attack, said she cannot return as it brings back bad memories.

"Dusit? No, I can't go back there," Chilande told Al Jazeera at her one-roomed house in the Kawangware informal settlement on the outskirts of Nairobi, which she shares with her three-year-old son and niece who has a similar-aged boy.

"There is a day I went back to pick up my belongings from the office and heard car alarms go off. My heart almost stopped. If I go back there I will be scared all the time."
She said her job at KAPS Limited had been kept open and continued paying her salary and helped settle her medical bills.

Regional tech firm Cellulant, which was hardest hit by the attack by losing six of its staff, is in the process of getting a new office elsewhere in the city, a source who did not wish to be named said.

But for others, business had to continue at 14 Riverside Drive after the bloody siege.
"Initially, there was a lot of shock and trauma. Real trauma," said Washington Akumu, a communication consultant at a public relations firm based in the complex.

"Coming back to 14 [Riverside Drive] wasn't easy but it had to be done, for business continuity and also for the bigger cause of not letting terror and its merchants win."

A quick end to the DusitD2 Hotel attack was lauded by authorities and security experts as an improvement in Kenya's counterterrorism measures since Somalia-based al-Shabab fighters overran Nairobi's Westgate Mall killing 67 people five years ago, and ambushed Garissa University killing 148 students in 2015.

Kenya, a hub for multinationals and the United Nations, became a target of al-Shabab after it sent troops into Somalia in 2011 to create a buffer zone along its long porous border.

At least 300 people have been killed in Kenya in about 20 attacks linked to al-Shabab since Kenya's army crossed the border to join the African Union Mission in Somalia's fight against the armed group.

Mwenda Mbijiwe, a Nairobi-based security analyst, said the reopening of DusitD2 Hotel was a show of resilience from the city and "the ability of the nation to rise from defeat".

"That Dusit [goes] back to business shows our ability to reincarnate," Mbijiwe told Al Jazeera.

"All these attacks show that the terrorists are not to be underestimated. They will keep trying. We need to close loopholes that these terrorists use to hit us."

The country is also struggling with the involvement of "home-grown" attackers who are not Somali and easily infiltrate communities without raising suspicion.

However, even with these new security measures, victims such as Chilande still find it hard to return to 14 Riverside Drive.

"For those going back, I tell them to take heart and do their job without fear," she said. "They say lightning doesn't strike the same place twice. So I hope it doesn't happen again."