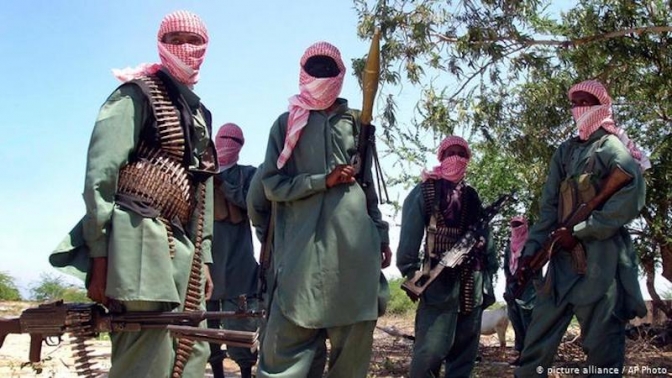 An al-Qaida-linked extremist attack on a hotel in the Somali city of Kismayo has killed at least 26 people, including two journalists and a UN worker. The hotel is often visited by lawmakers and government officials.

Somali security forces said Saturday they had ended an overnight terrorist attack on a hotel in the southern city of Kismayo.

The Friday night attack started with a suicide car bomb blast, followed by gunmen storming into the Asasey Hotel.

"The operation is over," police office Major Mohamed Abdi told the Reuters news agency.
The attack by al-Shabab left at least 26 people dead, including Kenyans, Americans, a Briton and Tanzanians, Jubbaland regional president Ahmed Mohamed said in a statement on Saturday.

A presidential candidate for upcoming regional elections was also killed in the assault, Mohamed added.

"Among the dead was also a Jubbaland presidential candidate named Shuuriye. Four militants attacked the hotel. One of them was the suicide car bomber. Two were shot dead and one was captured alive by Jubbaland security forces," he said, adding that 26 people had been killed and 56 wounded in the attack, including two Chinese citizens.

A staff member of UN's International Organization for Migration was also killed in the al-Shabab assault. "IOM Somalia stands in solidarity with the people of Somalia. We are deeply saddened by the terrible loss of one of our colleagues Abdifatah Mohamed Abdow who dedicated his work to Somalia. Our deepest condolences to families and loved ones of all those who lost their lives," the agency said in a Twitter message.

Last month, at least eight people were killed when a car bomb exploded near the Somali parliament in the capital, Mogadishu. Elsewhere in Mogadishu, security services at a checkpoint managed to spot another car bomb and open fire at it, killing a man in the car, which then exploded.

Another blast targeted a vehicle transporting police officers in Kenya, near the Somalian border. The al-Shabab terrorist group claimed responsibility for all three attacks.

Al-Shabab has been fighting to topple the government and install Sharia law for over a decade. The group was pushed out of Mogadishu in 2011 but continues to wage a guerrilla war in rural parts of the country.