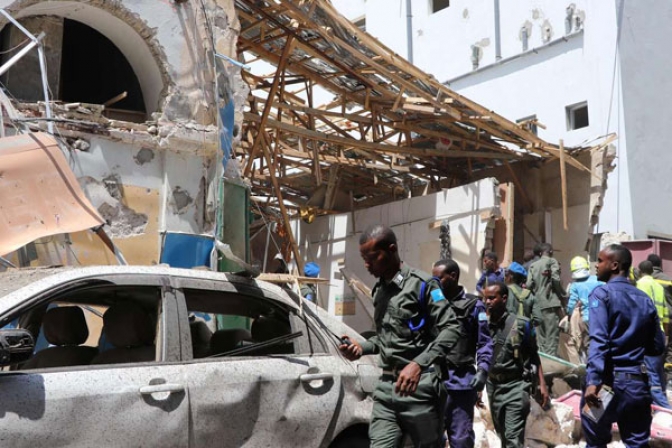 Al-Shabaab has significantly increased its attacks in Mogadishu, with explosions in the Somali capital occurring on an almost daily basis in the past two months, the United Nations secretary-general said in a report issued on Wednesday.

This upsurge in bombings and mortar attacks may be an indirect result of the stepped-up US air war on Al-Shabaab targets in rural Somalia, the report implied.

“They have also led, however, to increased Al-Shabaab movement into urban centres, in particular Mogadishu, where their forces are less likely to be targeted from the air.”

The greater frequency of mortar attacks is accompanied by “Al-Shabaab's improved capacity to hit strategic targets with precision and accuracy,” he added.

Mr Guterres' report coincided with a Security Council session on the UN Assistance Mission in Somalia (Unsom) that included some positive assessments of the country's efforts to enhance stability.

The meeting also highlighted differing views on the part of the United States and Somalia in regard to UN-backed restrictions on arms imports by the Somali government.

Abukar Dahir Osman, Somalia's UN ambassador, told the Security Council that significant gains have been made against Al-Shabaab in recent weeks.

He added, however, that progress is difficult to sustain “with one hand tied to our back.”

Ambassador Osman expressed regret over provisions in the long-standing arms embargo that applies to the Somali government.

Initially adopted in 1992, the embargo was subsequently amended to allow some arms to reach Somali security forces but on condition that a UN panel of experts be notified in advance of such transfers.

Jonathan Cohen, the acting US ambassador to the UN, implied in remarks to the Security Council that the Somali government may not be abiding by those provisions.

“Somalia appears to believe that the Security Council will eventually lift the sanctions despite a lack of engagement with the panel,” Mr Cohen said.

“The United States will not support this view which does nothing to address the problems the sanction regime was designed to address and indeed undermines the actions of the Security Council.”

He pointed to completion in March of the biometric registration of all 16,000 soldiers in the Somali National Army.

Their salary payments are not being made directly into their bank accounts, Mr Zenenga noted.

“This has cut out middle men, reduced corruption and ensured regular payment of salaries to military personnel. It also paves way for rightsizing the national army,” he said.

But not all is well with Unsom, the deputy head added.

He recalled that a January 1 Al-Shabaab mortar attack on the UN compound in Mogadishu took place on the same day that the Somali government expelled UN special envoy Nicholas Haysom, in response to his criticisms of security forces' killing of protesters.

They also “left our staff deeply demoralised,” he recounted.