He's accused of war crimes and torture. Uber and Lyft approved him to drive. Featured 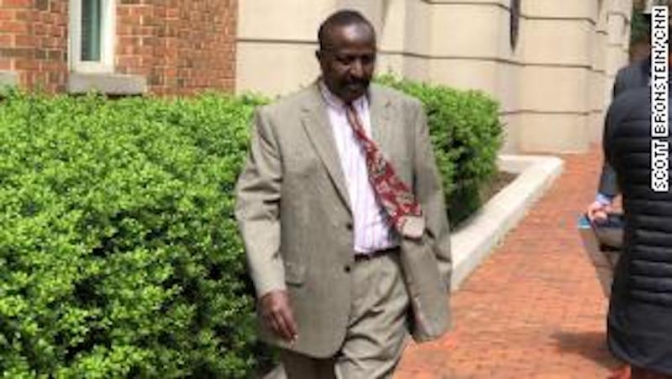 (CNN)Where does an alleged war criminal accused of torture and directing mass executions look for work while living in the United States? For Yusuf Abdi Ali, there was an easy answer: Uber and Lyft.

Within a couple of days of applying to be a ride-share driver, Ali said he was approved to shuttle passengers from place to place. He's been doing it for more than 18 months, according to his Uber profile.

When CNN reporters recently caught a ride from Ali, the former Somali military commander was listed on Uber's app as an "Uber Pro Diamond" driver with a 4.89 rating.

"I do this full time," said Ali, who drives in suburban Virginia. He explained that he prefers to drive during weekends because "that's where the money is."

Ali said he has driven for Lyft, too, but he prefers working for Uber. His white Nissan Altima had only an Uber sticker on it. Asked if the application process was difficult, Ali replied that it was a breeze.

"They just want your background check, that's it," said Ali, who was unaware that undercover CNN reporters were riding with him and recording the trip on video. "If you apply tonight maybe after two days it will come, you know, everything."

Ali's work as a ride-share driver raises new questions about the thoroughness of Uber and Lyft's background check process and the ease with which some people with controversial pasts can get approved to drive.

CNN previously reported that Uber and Lyft have approved thousands of people who should have been disqualified because of criminal records. Some of those Uber drivers have included a murderer on parole and a convicted felon who was later convicted for sexually assaulting an Uber passenger.

Ali has not been convicted of a crime, but a basic internet search of his name turns up numerous documents and news accounts alleging he committed various atrocities while serving as a military commander during Somalia's civil war in the 1980s.

His past was detailed in a documentary by the Canadian Broadcasting Corporation that featured eyewitnesses in northern Somalia who described killings allegedly committed under the direction of Ali, also known as "Colonel Tukeh."

One witness in that documentary said, "Two men were caught, tied to a tree. Oil was poured on them and they were burnt alive. I saw it with my own eyes. I cut away their remains."

Another witness in the same village said, "He caught my brother. He tied him to a military vehicle and dragged him behind. ... He shredded him into pieces. That's how he died."

When asked, "Did you see Tukeh do that with your own eyes?" the villager replied, "Yes, and there are many people around who saw it."
Ali has denied all allegations against him.

Uber strengthened its background check policy last year and it now includes more frequent checks, and disqualifies convicted drivers, as well as drivers who have not been convicted, but are charged with serious offenses. All drivers "must undergo a driving and criminal history background check reviewing local, state and national records, and we evaluate eligibility in accordance with criteria set by local laws," Uber said in a statement to CNN.

Following CNN's inquiries, an Uber spokesperson said the company had suspended Ali's access to the app as it reviewed the matter.

A Lyft spokeswoman responded that the company had permanently banned Ali from the platform. Lyft said he hasn't given a ride on its platform since September 2018.

"The safety of our community is our top priority and we are horrified by the allegations described. Before giving a ride on the Lyft platform, all driver-applicants are screened for criminal offenses and driving incidents in the United States," the Lyft spokeswoman said.

Uber and Lyft's background checks are mostly performed by a separate company called Checkr, which uses applicants' names and Social Security numbers to search for information in a national sex offender database, federal and local court records and databases used to flag suspected terrorists and others, representatives from the companies said.

A Checkr spokesperson told CNN that its background checks "rely on public criminal records that have been adjudicated in a court of law rather than unverified sources like Google search results. Similarly, most employers don't request background checks that include pending civil litigation due to its subjective nature."

This week, Ali is defending himself against a civil suit filed in federal court in Virginia by a man who claims he was one of Ali's victims in 1988. Farhan Mohamoud Tani Warfaa alleged in court documents that Ali tortured and shot him and ordered bodyguards to bury his body. The guards recognized that Warfaa, a farmer, had not died and accepted a bribe from his family to release him, according to documents.

Warfaa, who has come to the United States to testify against Ali, is being represented by the Center for Justice and Accountability (CJA), a San Francisco-based nonprofit that seeks to bring alleged war criminals to justice. The suit accuses Ali of directing a "brutal counterinsurgency campaign that refused to distinguish between civilians and combatants" between about 1984 and 1989.

Although the case against Ali has been allowed to proceed in US civil court, no criminal court has jurisdiction to try Ali for alleged war crimes. The International Criminal Court (ICC) wasn't formally envisioned until 1994, following the genocide in Rwanda, and Somalia has never been able to develop a complete justice system that could embark on a war crimes tribunal.

When approached outside the courthouse this week, Ali declined to answer CNN's questions. His attorney, Joseph Peter Drennan, dismissed the allegations against his client, saying the suit was politically motivated to benefit Somaliland, a breakaway region of Somalia.

According to public accounts, Ali moved to Canada after the Somali military regime he worked under collapsed in 1991. He was deported after news about his alleged war crimes in Somalia became public through that CBC documentary.

Federal agencies knew airport guard was accused war criminal
Ali entered the United States on a visa through his Somali wife who became a US citizen. In 2006, his wife was found guilty of naturalization fraud for claiming she was a refugee from the very Somali clan that Ali is accused of torturing.

CNN's recent Uber ride with Ali was not the first time the network has caught up with him as he sought to make a living in the country.

In 2016, CNN reported that Ali had been working as a security guard at Dulles International Airport near Washington, DC.

He was fired from that job shortly after the CNN story aired.