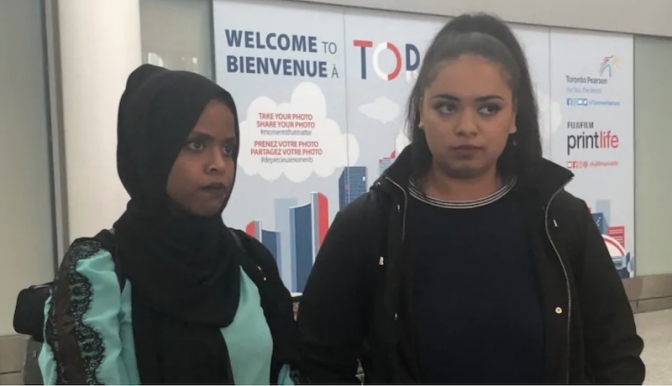 Maymona Abdi, 28, and Karima Watts, 24, arrested in January, released in April. Two Canadian women freed from a prison in Somaliland say they endured extreme abuse "bordering on torture" while they were detained for two months overseas.

Maymona Abdi, 28, and Karima Watts, 24, originally from Ottawa, arrived at Toronto's Pearson International Airport on Sunday. They were arrested by police on Jan. 19 for allegedly drinking alcohol in the Somaliland city of Hargeisa. They were held without trial and released on April 23.

Consuming alcohol is illegal in Somaliland, a self-declared republic still internationally considered to be part of Somalia. The women disputed the charge, but were detained at the Koodbuur Station Women's Prison in Hargeisa.

"I feel a lot of relief. It's been really hard," Abdi told reporters at the airport shortly after their arrival. "I'm super tired and anxious."

Abdi said she thinks they were released because of media coverage of their plight. She said Canadian consular officials did not help them as much as they needed.

According to their lawyer, Mubarik Mohamoud Abdi, the women signed confessions under duress, hoping to avoid being detained. They were sentenced to 2½ months in jail and 40 lashes. He said the prosecution in the case did not prove before the court that the women drank alcohol.

'Name a place where it isn't dangerous to be us'

In a prepared statement that she read aloud, Abdi said people have asked them why they went somewhere as dangerous as Somaliland. She said the two felt an obligation to help women facing violence.

"Name a place where it isn't dangerous to be us. Where is it safe to be a woman? In reality, it is women on the ground, who look like us, who are sacrificing everything."

Her family retains property in Somaliland, according to Abdi's mother Fahima Hassan.

A UN report says Abdi was working to intervene in the protection of women at extreme risk of gender-based violence, but they did not go as official representatives of a non-governmental organization.

Abdi said she and Watts were subjected to extreme emotional and psychological abuse as well as "physical retaliation" in prison. She said they were denied medical aid, legal counsel and, at times, food and water.

According to international human rights conventions, that denial constitutes torture, she said.

"We burdened our struggle in silence," she said. "For two months, while we were being detained, the world had no clue where we were and what we were being subjected to."

Silence enables violence, she added. "We will stand up for each other as women wherever we face violence," she said.

Jason Jeremias, a human rights activist based in New York City connected to the organization the Price of Silence, spoke up on their behalf, drawing attention to their case, she said.

"DON'T GIVE UP FIGHT FOR HUMAN RIGHTS, SHE SAYS"

Abdi, whose sister is in Toronto, said she plans to go to the hospital to be assessed. She said they also have to decide where they are going to live.
She added she would like Canadians not to give up the fight for human rights and to remember many people around the world are suffering in silence.

"I want them to know, there's people out there that go through things but nobody really knows," she said. "Be aware of it. Open your eyes."

Shirley Gillett, project co-ordinator of I Do! Project in Toronto, said she believes the charge of consuming alcohol was trumped up. The project works with survivors of forced marriage and those at risk of forced marriage.

Gillett said Abdi, who lived in Vancouver before heading overseas, has done work with the project. She said Abdi contacted her after she had arrived in Somaliland.

"They've been through a lot of stress. They're exhausted as well. They were living in conditions that were deplorable, to say the least," Gillett said.
"We're just relieved that they're home. We're just looking to getting them to good health, supporting them in any way they can."

In a statement earlier, Hassan had said: "Maymona and Karima were born and grew up in Ottawa, Canada, as best friends. When Karima's mother died, she became our daughter."

Canadians are urged to avoid all travel to Somalia, according to the Canadian government in a travel advisory that was last updated on April 25.

"If you are currently in Somalia despite this advisory, you should leave immediately," the travel advisory reads.â€¨

"The security situation in Somalia is extremely volatile and the threat of domestic terrorism is high, particularly in south-central Somalia and in the capital, Mogadishu."